We couldn’t help but obsess with Starcourt Mall in Stranger Things 3. The 1980’s was notorious for Neon Lights so it’s no surprise, several stores had neon signs. If you are looking for a custom neon sign for your home, office or studio then get in touch us. All our neon lights are handmade using glass & come with 12 months warranty.

Set in the town of Hawkins Indiana, Starcourt Mall was where it all went down in Stranger Things Season 3. Which stores did you see in The Starcourt?

As you enter Starcourt Mall you’ll see a large The Starcourt neon sign in blue suspended from the ceiling.

Like all good shopping malls, there’s a food court on the bottom floor in the Starcourt. Did you spot the neon sign for The Food Court? We can create custom neon sign that are fixed to the wall, hanged or even mounted on a plastic base.

The food court in Starcourt Mall appears to have something for everyone from classics such as Burger King to independent restaurants like Imperial Panda. As we navigate the food court, we find Hot Dog on a Stick which still exists today and serves as you might have guessed, Hot Dogs. Next we find Hawkins Heroes and then restrooms.

There’s a Burger King next to the Taco Bell which is coming soon, followed by Imperial Panda and then Orange Julius. Orange Julius was founded in the 1920’s and still operates today serving smoothies.

There’s much more than just food outlets on the ground floor. There’s The Gap where Eleven and Max try on new clothes which is next to JCPenney and Scoops Ahoy. On the other side of JCPenney, there’s The Ground Round.

Scoops Ahoy is the ice cream parlor where Dustin, Steve & Robin crack the Russian code. This is a fictional store that was created solely for Stranger Things Season 3. It’s on the ground floor in between Gap & Lovelace Lingerie. 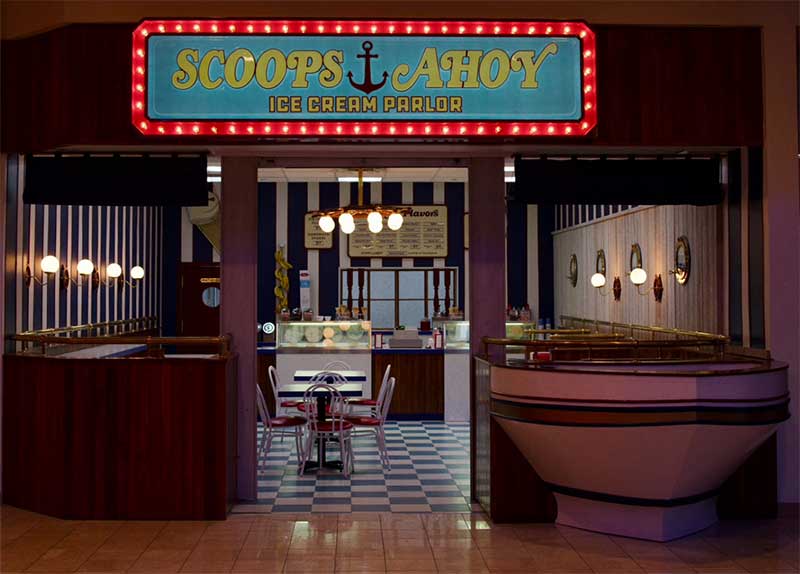 Scoops Ahoy is directly opposite Orange Julius. You can see Orange Julius when Erica is asking to try the peanut butter chocolate swirl ice cream in episode 3. As we continue to explore the ground floor, there’s signage saying Esprit is coming soon.

There’s also Sam Goody, the entertainment retailer which boasts a hot pink neon sign. As neon signs are made from glass and filled with gas, they are extremely bright and light up the surrounding area. Create your own custom neon sign by contacting us today.

As Steve & Dustin are trailing the Evil Russian with the duffle bag, they pass Radioshack & Chess King on the first floor. You may not remember Chess King but it focused on young men’s clothing before eventually closing in the 90’s. The supposed evil Russian turned out to be the dance instructor for Jazzercise.

There’s also a Cinema in Starcourt shopping mall near to Jazzercise which is directly above Sam Goody. It’s currently showing the following movies; Back To The Future, Cocoon, Daryl, Fletch, Return to Oz, The Stuff. All these movies were released in 1985.

The first floor also features a Waldenbooks which was part of Borders which closed down in 2011. For those of you who watched Stranger Things 3 closely, you’ll notice the window display of Waldenbooks promoting ‘Breaking Moscow’ by Arkady N. Shevchenko, a book which was released in 1985. 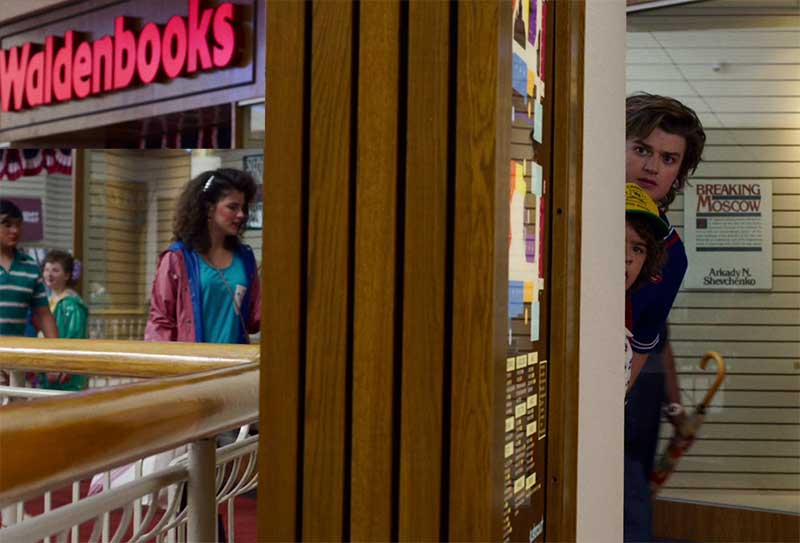 There’s also a Claire’s with a bright neon sign for Ear Piercing. Regis Hairstylists is next to Claire’s and directly above the Foodcourt. Both of these store still operate today, have you ever visited them?

Other stores that feature on the first floor include Wicks ‘N’ Sticks, Zales and Kaufman Shoes which is directly above Hawkins Heroes & Burger King. 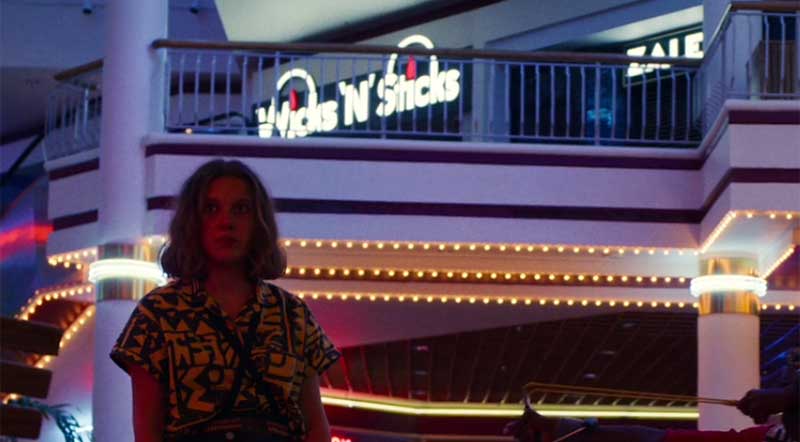 Looking for a small neon sign for your home or studio? How about an Open Neon Sign like the one used in the Family Video store where Robin & Steve go to apply for jobs in the final episode.